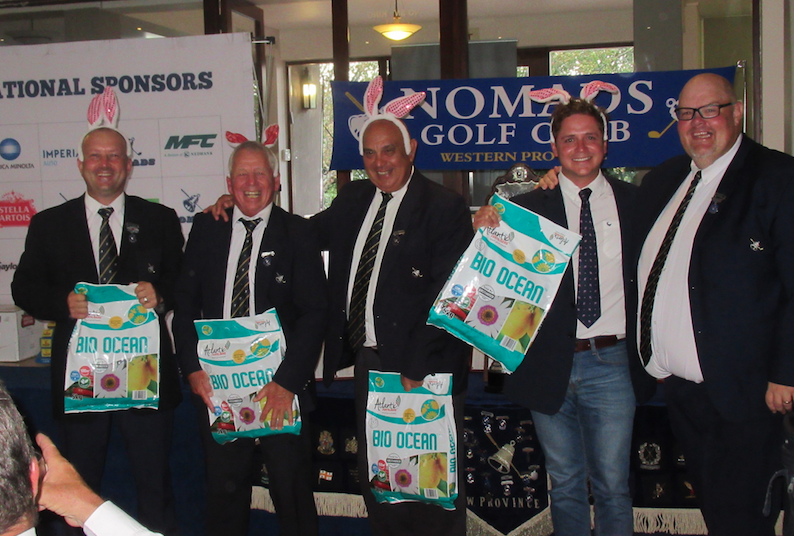 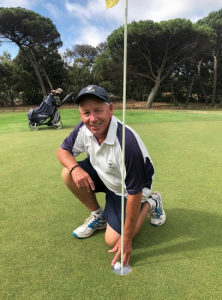 We were welcomed to our first game of 2020 by a howling Southeaster and this had an adverse impact on the scoring. Despite the wind there was some amazing golf. Steven Craig sank this 3-foot par putt on the 9th (his 18th) for a 40-pointer. Then Mike Humby made a hole-in-one on the 16th (we won’t mention that his 4-ball were the Altar Bunnies).

We had a field of 127 players and the average score of 28.4 is an indication of the difficult conditions. Congratulations to the Division winners, Steven Craig (40 pts off 4), Tony Amaro Jnr (36 pts off 9) and Andrew Prior (35 pts off 19). 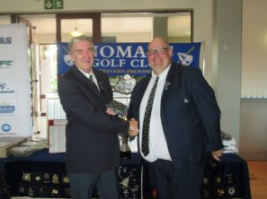 We are fortunate to have so many long-serving members. I was fortunate to play with Dave Park-Ross on the day we celebrated him receiving his 35-year tie. Dave, as usual, did not want any fanfare but there is no denying his contribution to our club. In his words, one of his Nomads highlights was doing Golforama duty at Sun City for the Nedbank Golf Challenge on five occasions. I was also joined by Bill Language. Bill is an incredible Nomad who gives freely, supports wherever he can and just quietly gets on with things. Bryan Ginsberg, one of the two Captains of KDM was the final member of the 4-ball and we were very fortunate to pip the opposition by a single point after he boxed a knee-knocker on the last.

We welcomed four new members to our ranks. Brian Felix, Peter Davies, Neil October and Antony Voges were inducted and we wish them well on their Nomadic journey.

The other highlight of the evening was when our Vice-Captain, Gary Cahi, did the ceremonial handover of a cheque for R200 000 to his Andrew Mentis beneficiary, Maitland Children’s Hospital.

Thank you, as always, to our national and local sponsors. Our next monthly game is at Kuils River on 27 February 2020.

Yours in Nomads
Carl Potgieter

With Nomads having become firmly entrenched in the Transvaal in1960 and the Natal Club having got through its fits and starts to becoming successfully established in 1964, Nomads founder Mike Florance was able to give some consideration to sowing the seeds for the possible formation of a club in the Western Province.